Parallel with the Basilica del Pilar 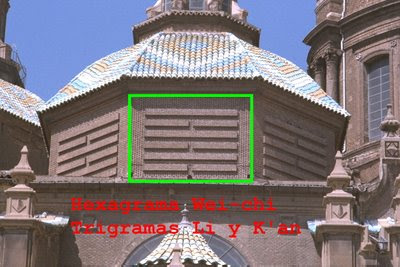 In the decoration of the dome of the Basilica del Pilar is represented symbolic signs, lines 6 are formed by alternating continuous and discontinuous, are signs of mathematical basis, representing respectively the numbers one and zero. Thus the number 42 is represented in binary base.
This mysterious number we can link with Abulafia, according to Maimonides as he says that the name of God which was the creation of the 42 letters, and that the meaning of this number can not be transmitted if it is not loudly, because its meaning is sealed. Note that the 42 letters in a circle in the figure above starting with aleph and ends with the tau, the first and last alefato Hebrew corresponding to the alpha and omega of the Greek alphabet. Remember that Christ is called the alpha and omega, and to embody the "Word" are required 42 generations, according to the Gospel of Matthew.

Diagrams made with the 42 letters, which according to the Zohar, spoke on the creation and God's hand that gematricamente worth 42 in the writing of Abulafia. A parelelismo found on the iconology of the Basilica del Pilar with the description that Abulafia of the seven seals that are necessary open to understanding scripture, we find it in one of its doors, especially in an image that appears in the "Lamb" lying on the book of seven seals. Similarly to the seven seals of the Book of Life Christian Abulafia describes seven stages or degrees of knowledge of the Torah, from research on the meaning of the word to the stage of prophecy, Abulafia a distinction between the prophetic Kabbalah, which is the sixth stage, and the Holy of Holies of which it is just the preamble. The essence of this final stage, which includes "the language that comes from the active intellect, must not be disclosed even if it was possible to dress words. But, as we can deduce from the symbolic interpretation of the image of the Virgen del Pilar, where the veil is held by the Virgin Mary and Jesus, and they have the unveiling.
In his book "The Seven ways of the Torah," says: "As to the seventh track is unique and contains all others, it is the meeting place of the sacred and the other covers, the one that penetrates perceives the divine Logos (Word), which emerged from the Agent Intellect, is to affect the rational faculty of man. The Logos, in fact, is an overabundance of the name (blessed be) which, through the intermediary of the Agent Intellect, comes to the rational faculty. This is explained by the teacher (Maimonides, blessed be his memory) in Chapter 36 of the second part of the Guide. This road leads to the very essence of true prophecy, it gives the means to an approximation of the quiddity (what or whom) the unique name, this is the only one to be a prophet among men. Not appropriate here to describe precisely the seventh track, which is twice a saint. For it is not possible to transmit the knowledge of the name of 42 letters and 72 letters of the name of the man who wants to buy if not loudly, not to communicate any other way to the tradition of respect, if not more than early base. It is why I prefer to be very brief on this point, as is appropriate in such matters. These are the seven ways in which the whole Torah is contained. " 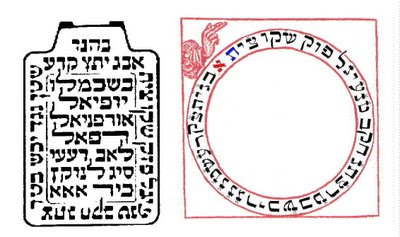 According Abulafia, the Torah is, in a certain level, identical to the world of forms, or God Himself, so that it is not possible that a basic change might occur in nature. Anyway the Theosophical Kabbalah midrash and the attitude in general, relate to the Torah as a dynamic entity, continually reveals hidden treasures which the interpreter. Theosophical closer to the Torah and its language, Abulafia's doctrine is based on the idea that the most mystical meaning is discovered through self-associative combination of letters whose links are separated to permit the emergence of new combination. This deconstruction has to precede the reconstruction, since the Torah is more a process than a static ideal. This process, similar to "solve et coagula 'alchemy, trying to transcend the language so that it becomes a series of nonsensical combinations of letters that follow strict mathematical rules, leading to the mystical beyond the normal state of consciousness.
Publicado por Abulafia en 13:25 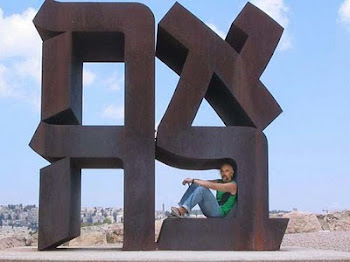